Cooper Gallant is one of the brightest rising stars in tournament bass fishing. Competing in a full slate of nine Bassmaster Open events this season, this energetic 24-year old Canadian is reaching for lofty goals – including a coveted spot on the Bassmaster Elite Series – as he leverages his expertise against fields of talented, ambitious anglers. At the recent Bassmaster Southern Open event on Cherokee Lake near Knoxville, Tennessee, Gallant moved closer to achieving his on-the-water goals by claiming his first Open Championship, a distinction that carries with it another prestigious prize: A spot in the 2023 Bassmaster Classic.

“I have been fishing bass tournaments for over ten years, competing in my first when I was 13,” reflected Gallant on the day after he traveled to the site of the upcoming Northern Open on the James River. “That first event hooked me, and I’ve focused everything I’ve done since then on climbing to fishing’s highest competitive level – the Bassmaster Elite Series.” True to his north-of-the-border origins, Gallant has an innate affinity for smallmouth bass. “I love chasing smallies,” offered Gallant, “and as it turns out, every fish I weighed at Cherokee Lake was a true bronze beauty – and this is how I caught ‘em.”

“We had some cool days and cold nights during the practice period before the event. Although the timing was right for shallow bedding fish to dominate the bite, I worked to develop a pattern that wouldn’t be impacted as badly by fickle spring weather. Starting on my second practice day, I figured out how to find and catch staging offshore smallies in water that was anywhere from 15 to 30 feet deep. I was able to locate some nice schools of bass, and dialed in that bite on the third practice day. As we approached the event, however, the weather started warming. I saw that my groups of fish were getting smaller as bass moved toward the bank. I felt like I would have to keep an open mind and be willing to adjust from my deep pattern to chasing shallow spawners if that really kicked into high gear on competition days.”

Fortune smiled on Gallant as he lowered his trolling motor into the water on the first tournament day. “I was fired up to see that the water was still cold – right around 52 degrees – which meant I should still be able to make it work with staging fish. Within the first 10 minutes of fishing on that first day, I already had 15 pounds of smallies swimming in the livewell, and I knew I had a shot at earning some important points toward Elite qualification – and maybe even winning the event and a trip to the Classic. My primary presentation was a Damiki Rig, with a 4-inch fluke rigged on a ⅜-ounce Smeltinator jig. I also threw a drop-shot rig with an X-Zone Hot Shot 3 ¼-inch Minnow in the green pumpkin/blue pattern anchored by a ¼-ounce weight. These are two classic ways to bag smallies back home, and I was excited to see that Cherokee Lake bass were also fired up by them.” 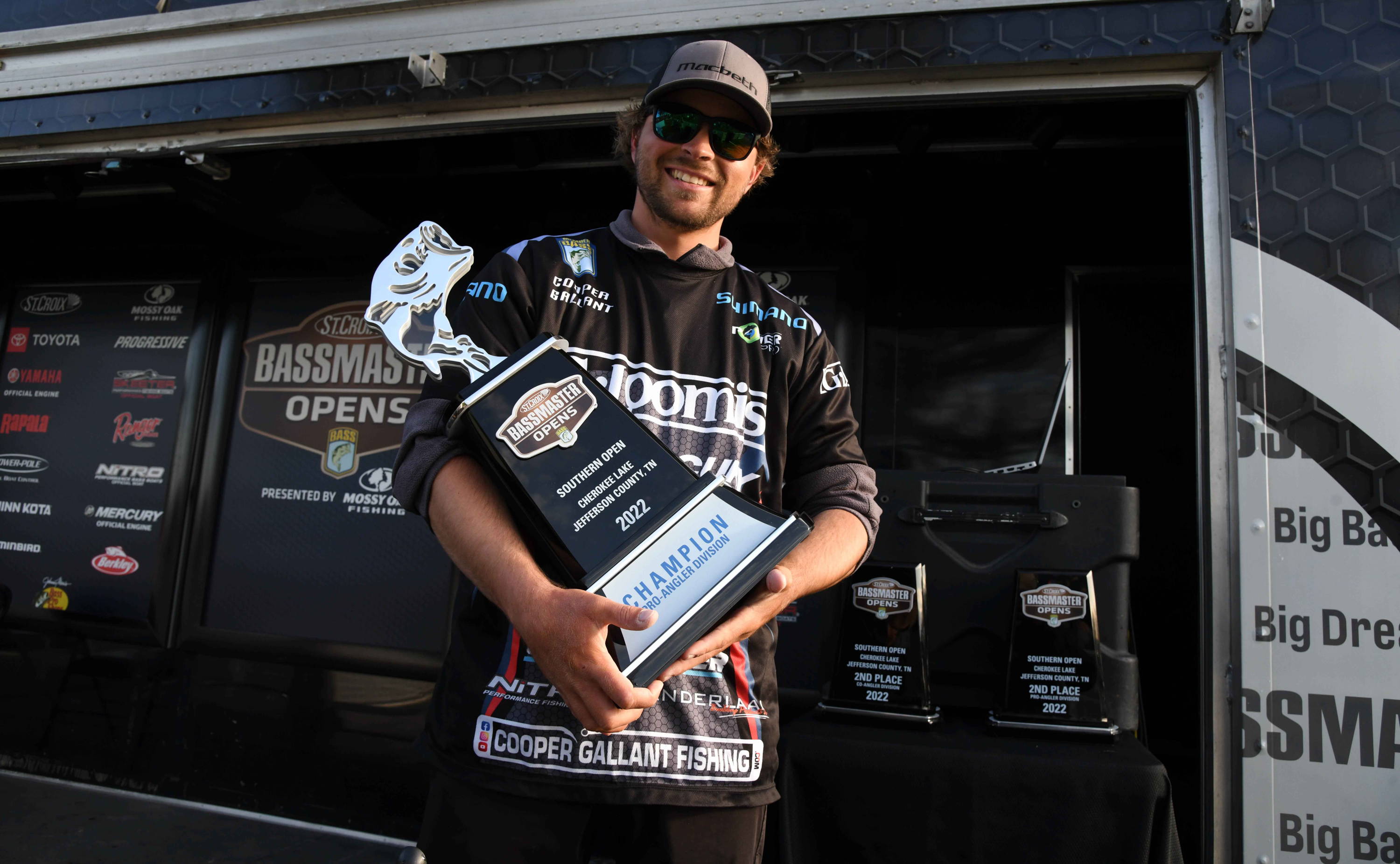 “My G. Loomis and Shimano equipment played key roles in getting my fish in the boat and putting my first Bassmaster Open trophy on the shelf,” asserted Gallant. “I used a G. Loomix IMX-PRO 893S JWR, which is a 7’5” rod with Medium-Heavy power and Extra Fast action. I love the taper on this rod; it has a sensitive tip that transitions smoothly into a beefy backbone that loads up with a parabolic arc. This helped me get good hooks into my fish, and to boat-flip them – even the big ones – without worrying about boatside tragedies. I equipped the rod with a Shimano Vanford 2500, spooled with 10-pound-test PowerPro and finished with a 12-pound-test fluorocarbon leader.”

Cooper Gallant envisions a future beyond the Bassmaster Classic and the Elite Series. “I love being behind the camera, just as much as I love teaching others how to catch the biggest fish of their lives. In the future, I plan to be the host of my own fishing show, so I can teach and inspire others to enjoy fishing as much as I do. You can get a sneak preview of my video work on my YouTube channel – Cooper Gallant Fishing – where viewers can enjoy my series, ‘The Elite Series Chase.’ Here, I share what it’s like to pursue a dream through the Bassmaster Opens – both on and off the water.” 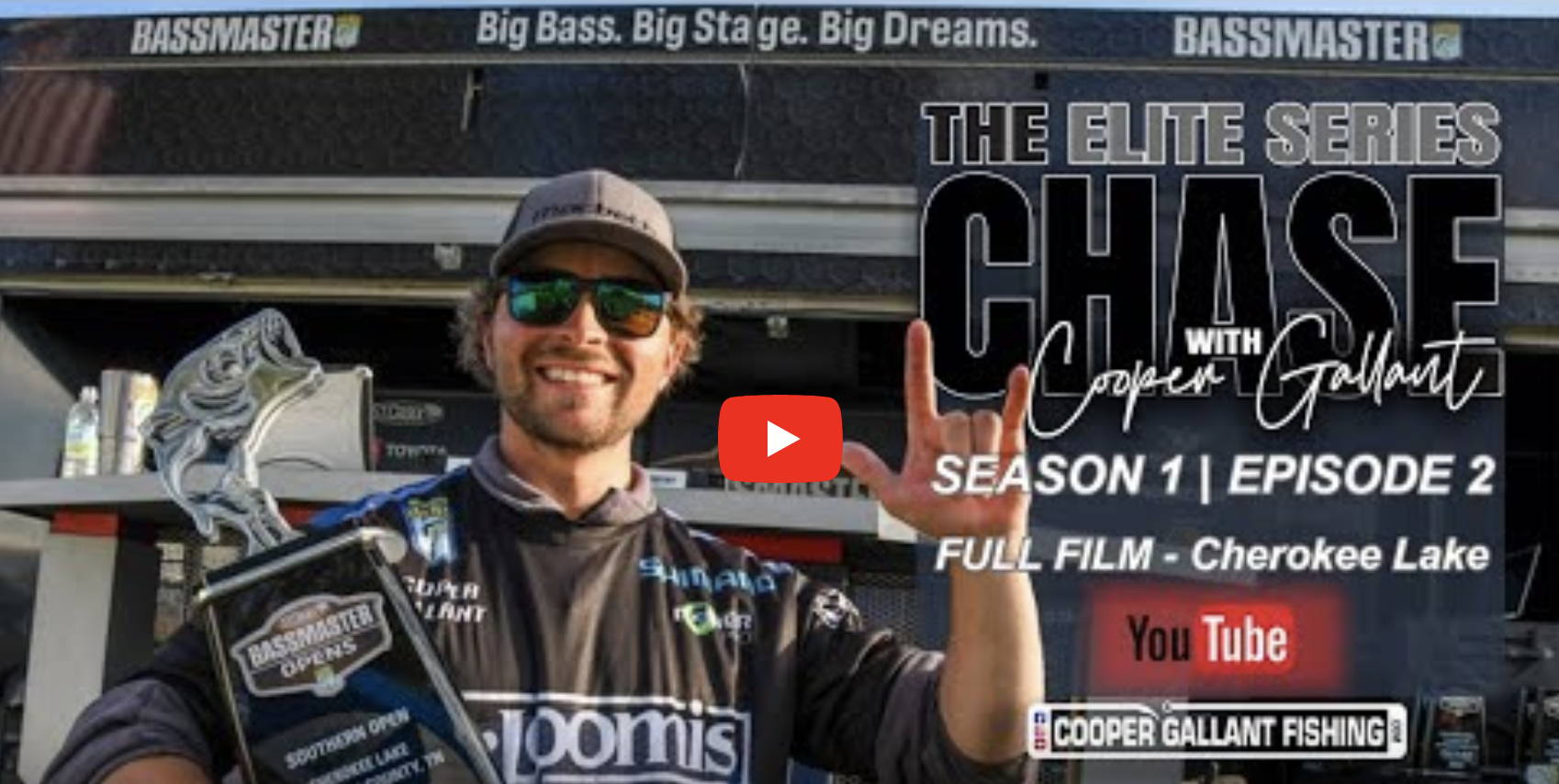 Cooper Gallant has a bright future in competitive bass fishing. Shimano and G. Loomis congratulate Cooper on a great event, and look forward to following him through the rest of the Bassmaster Opens schedule – and to cheering him on at the 2023 Bassmaster Classic.